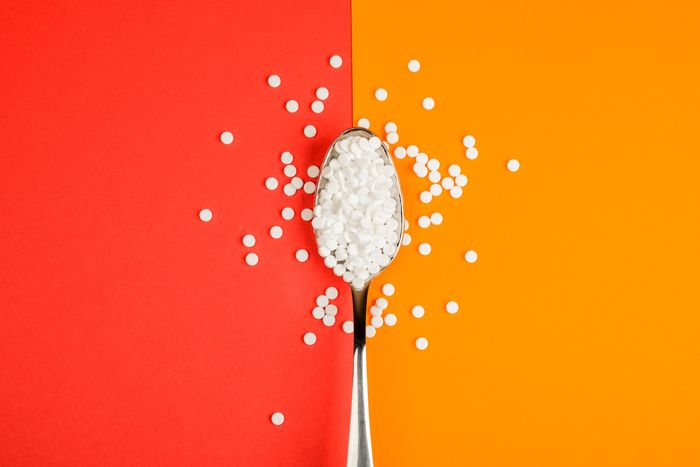 Artificial sweeteners have been intensely controversial. Are they safe alternatives to sugar, or deeply harmful to the gut? Read the full story.

Artificial sweeteners aren’t toxic at normal dosages, but there are some negative health effects that can occur.

Most of the negative health effects occur at higher dosages.

The most concerning effects are changes to our gut microbiota, which can lead to less of an ability to clear glucose.

Not all the changes in our microbiome are bad, but it would still be wise to limit consumption.

It also seems like everyone is affected differently, so you have to pay attention to your own body and see how it affects you.

However, if the choice is between sugar and artificial sweeteners, I’d choose the latter.

I’m deeply skeptical of everything I hear. I don’t trust any information about artificial sweeteners – either that they’re safe or unsafe.

I decided to look into it a bit. I’m trying to look at the whole picture, including the mechanisms, clinical trials, animal studies, and case reports.

I wanted a balanced post dedicated to information on Artificial Sweeteners. I will add to this as I come across new information.

My general attitude is not to believe the scaremongering of many alternative health leaders.

I’m also pretty skeptical that science can prove categorically that artificial sweeteners or anything for that matter, is ‘safe,’ i.e. without negative health effects.

Science takes a really long time to work. This is because humans are conducting the science (and we are faulty), there are conflicts of interests, confounding variables, the complexity of life and most importantly the amount of money and time it takes to unearth effects.

It’s rare for funding to exist in order to study something the way it needs to be studied (funding not by the companies that have a vested interest). And even if the funds were there, it would still take a long time.

The artificial sweetener Saccharin was discovered in 1879 and was in widespread use for 100 years. Yet 100 years on and science is still finding out new information and bickering about old information. We’re still unclear about its effects on weight.

It took a while to know that cigarettes are bad and we’re still discovering new information. There’s still no scientific consensus if saturated fat is bad or not, though we’re learning that it depends on many factors.

Science is more likely to discover an effect sooner if a side effect is widespread. But it could take forever for science to tease out a small effect that’s experienced by 1% or less of the population – either positive or negative.

In the last decade, science has been uncovering how every person is different in so many ways and there’s no one size fits all.

Hence, you have to experiment and see what works for YOU. Knowledge can always be useful in the process.

Aspartame May Help You Lose Weight

A review in 2013 concluded that the evidence up to that point suggests it’s more likely that artificial sweeteners help us lose weight [1].

Some studies show that artificial sweeteners can increase our appetite and possibly cause us to eat more [2]. However, this was recently debunked.

In 2013, a clinical trial was done with 210 people that lasted 6 months. People were told to substitute sugar sodas for diet sodas or water. The study found that there was no difference in calories consumed at 6 months between the groups. Both groups lost weight because they consumed less. There was also no change in taste preference between the groups [3].

The most recent trial that I found was done in April 2014 and published by the American Journal of Clinical Nutrition. It went on for 10 weeks and compared two groups. One ate table sugar while the other ate artificial sweetener instead.

There’re many more studies and the picture isn’t completely clear. It’s probably the case that the story is complex.

For example, studies show that children eat more when consuming artificial sweeteners, but not adults. [5]

In my own experiments, I could see both sides of the story. Artificial sweeteners do up my appetite a bit, but I’m also taking in fewer calories. It’s tough to say what wins out, calorie wise.

My opinion is that most people will lose more weight by substituting full sugar sodas for diet. But this won’t be the case for everyone. See what works for you.

Splenda is a GLP-1 agonist, which should theoretically increase wakefulness and satiety (wakefulness because it functions as orexin) [6].

Obviously, there are many other mechanisms at play that may counterbalance the effect; hence the word “may”.

Artificial Sweeteners Make Us Less Able to Dispose of Glucose

In a study published in Plos (October 2014), rats who ate a high-fat diet plus aspartame consumed fewer calories, gained less weight and had a more favorable body composition, compared to animals with the same diet without aspartame.

The study thinks this was because of an increase in propionate, a short chain fatty acid.

However, propionate also has protective properties against obesity [8].

Not all the changes were bad in this department. The obese mice fed aspartame had lower glucose levels when challenged.

It should be noted that these changes commonly take place when people go low carb, yet they still lose weight (higher fasting glucose, lower insulin tolerance).

In a study published in Nature, 7 healthy males who did not normally consume artificial sweeteners ate the maximum allowed level for a week. Four of them became glucose intolerant and the other 3 were resistant to the negative effects [9]. The maximum dosage is quite a lot.

You can see the non-responders had greater spikes compared to their own previous blood tests on day 1-4.

The study’s limitation is that it didn’t have a control group.

Two studies have been published in the past few months that deal with artificial sweeteners and the effect on our microbiota.

The study from Nature called for “a reassessment of massive Artificial Sweetener usage” [10].

The study found that the artificial sweetener Saccharin caused an increase in acetate and propionate, with no change in butyrate (in mice) [9].

In humans who consumed the maximum as allowed by the FDA resulted in more Bacteroides and fewer Clostridiales, which is associated with type 2 diabetes [9]. (the Nature study)

The study published in PLOS (also discussed above) found that a low, but chronic Aspartame dosage changed the levels of various short-chain fatty acids in rat gut microbiotas. They consumed an equivalent of 2-3 cans of diet soda per day.

Not all of the changes were ‘bad’ and some were even good.

The rats who ate their normal diet plus aspartame increased all short-chain fatty acids except isobutyrate. The most significant increase was with propionate.

For the fat rats (induced by a high-fat diet), propionate increased by quite a bit and butyrate decreased.

Propionate and acetate are found to be elevated in people with IBS and it made it more severe [11]. So assuming the relationship between propionate and IBS is causal, Aspartame can increase IBS symptoms.

On the upside, propionate has also been found to protect against obesity [8] and reduce cholesterol in animals [12].

It’s important to realize that many fibers in fruits and veggies increase propionate [13].

Indeed, fruits and veggies are a good weight loss strategy but can exacerbate IBS in some circumstances.

Higher Firmicutes and lower bacteroidetes are associated with obesity. Since aspartame can increase bacteroidetes in animals, Aspartame might even have a positive effect on the high-fat/obese rats. But it lowered bacteroidetes in the normal rats by a bit (not significant).

There’s much more we don’t know about artificial sweeteners and the gut microbiota than what we do know.

Animal studies have mixed results and their results don’t necessarily translate to human studies. And in humans, there are different responses. There needs to be a lot more research.

High dosages of Aspartame (~1750mg) causes a worse mood in people and a decline of spatial orientation [14].

However, the dose makes the poison and a packet of Equal only contains 37 mg of Aspartame. I wouldn’t go crazy with these, but I don’t see how one packet will cause any harm to the vast majority of people.

This means that more people who took the placebo had headaches. However, it’s possible that a small percentage of the population can be affected in some ways.

For example, people who might be sensitive to formaldehyde might get a migraine, because it converts to it [16].

No study can conclusively say that YOU aren’t affected in some way. But a study can indicate that something is not a widespread problem.

So if you get headaches from Aspartame then stay away from it, but it’s probably very rare.

Given my impression thus far, I’d say that if you’re going to eat sugar then it’s better to consume artificial sweeteners.  So choose diet coke over the sugar version – if you are determined to consume coke…This advice is for weight loss and general health. Regarding long-term health, I’m not concerned at all based on my patterns of usage.

Stevia could also have negative effects in very large amounts and xylitol can cause intestinal discomfort. The takeaway is that you shouldn’t go overboard with anything, but having a little artificial sweetener here and there isn’t likely to be harmful at all.  I wouldn’t consume  2 diet sodas every day, however. I look at what the FDA thinks is safe and don’t go over 1/20th of that. The FDA itself uses a large margin for safety.

Diet
5
5
The Benefits of an Elemental Diet & Who Should Try It
Fats
3.6
53
How MCT Oil Makes You Allergic to Foods
Devices
4.2
407
ICES: Tool Combats Fatigue & Inflammation (Upgraded PEMF)