Interleukin-6 (IL-6) is increased in almost all disease states. Read on to discover the causes of high IL-6 and natural hacks to decrease it.

Interleukin-6 (IL-6) is a cytokine with well-defined pro- and anti-inflammatory properties [1]. It regulates the immune system and plays a role in cognitive function.

IL-6 is elevated when you are sick and after exercise, especially aerobic exercise [2].

If exercise increases inflammatory markers, then why is exercise healthy? Well, when you exercise, your muscles release IL-6, which is anti-inflammatory. However, when your immune cells (macrophages) release it, it’s pro-inflammatory [2]. The harmful effect has to do, in part, with it being released with other immune cells that synergize in a negative way.

IL-6 also suppresses Th1 cells, while it induces Th2 cells [3], so it’s worse for Th2 dominant folks. It also increases B cells, which is what produces antibodies and contributes to allergies and autoimmunity [4].

People who aren’t predisposed to autoimmune issues can also have elevated IL-6. It’s the cytokine that is involved in the diseases of modern civilization. The most common cause is probably obesity.

There are two ways that IL-6 can activate cells. One way is anti-inflammatory and helps in tissue regeneration. Another is pro-inflammatory and causes all kinds of problems. See below for a more detailed explanation.

The most common reasons for elevated IL-6 are obesity [5], chronic stress [6], too little sleep [7], eating too much – specifically, eating too much sugar or refined foods [8], smoking [9], excess alcohol, [10] and exercising too much [11] (more than 2 hours of intense exercise a day is probably not a good idea for most).

IL-6 levels are increased in nearly all disease states [1].

It decreases Treg cells, which in turn blocks our ability to create tolerance for proteins we ingest – causing allergies [12]. It also increases the production of neutrophils, which is inflammatory [2].

IL-6 may cause feelings of “hopelessness“. This state strongly correlated with IL-6 levels [14] and we know this cytokine can cause brain changes that lead to a worsened mood. IL-6 is also correlated with violent suicide, impulsivity, and monotony avoidance [15].

Studies have found that IL-6 aggravates the effects of stress hormones (CRH) on our gut mucosa, which causes IBS [19]. It also causes IBS by activating gut neurons [20], which alters peristalsis. IL-6 can cause leaky gut [21].

IL-6 may lessen fatigue by stimulating the HPA axis and suppressing TNF-alpha (thereby increasing orexin). Specifically, it stimulates the release of the corticotrophin-releasing hormone (CRH) by the hypothalamus (reversed by a COX inhibitor) [22].

It increases nitric oxide [4], which can be good or bad, depending on the situation.

At higher levels, IL-6 increased the release of vasopressin and oxytocin [22], which acts to decrease urination, among other effects.

IL-6 suppresses or ‘hypermethylates‘ gene expression in the brain, which leads to a variety of problems [2].

For example, it decreases BDNF, a brain growth factor, which is how it contributes to depression [2].

People with major depressive disorder have elevated IL-6 (TNF-alpha) [23] and it likely contributes to a worse mood overall.

It can also lead to lower testosterone levels [24].

IL-6 also decreases performance by decreasing the conversion of T4 to T3 (thyroid hormones), resulting in lower levels of T3. This occurs as a result of IL-6 causing oxidative stress and lowering glutathione levels [26, 27].

IL-6 contributes to schizophrenia by inhibiting (or hypermethylation) a gene (GAD67) that is important for GABA to work properly [2].

HDAC inhibitors are beneficial for cognitive disorders because they increase gene expression for growth factors like BDNF. IL-6 does the opposite by increasing HDAC [28]. Resistant starch is a powerful way to inhibit HDAC and therefore increase BDNF.

IL-6 is the most potent inducer of CRP, an inflammatory marker, but as I will explain below, you can have normal CRP levels and abnormal IL-6 levels.

IL-6 can also cause skin problems. When your natural skin fungus gets out of control the body attacks it with cytokines that include IL-6 (also IL-1b, TNF, IL-8), which recruits other aspects of the immune system [31]. IL-6 is elevated in people with tinea versicolor, a skin fungus [32]. IL-6 also increases Th22 cells, which disrupts skin microbial balance [33].

I would say IL-6 is mostly bad if elevated, but brief spikes can be beneficial, just like brief bouts of intense exercise.

Science has discovered that exercise can help you lose weight more than by just burning calories; exercise changes your hypothalamus [41].

IL-6 is part of this mechanism by which exercise can help us lose weight [41].

IL-6 decreases insulin and leptin resistance in the hypothalamus, the gland that controls appetite (requires IL-10 to inhibit Nf-kB) [42]. 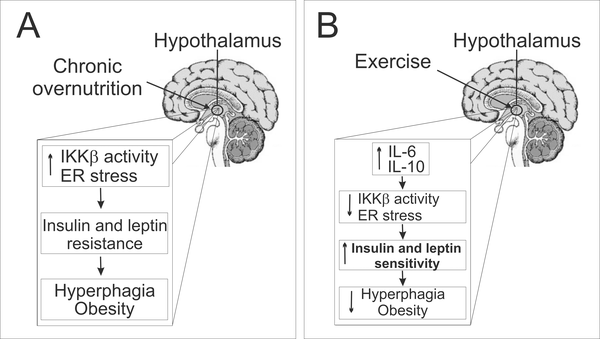 IL-6 plays a protective role in many bacterial, viral, and fungal infections.

It has a protective role in the flu, H pylori, and EMCV [43]. Mice deficient in IL-6 are significantly more susceptible to some fungal infections like candida [44].

IL-6 is responsible for causing many autoimmune diseases [46]. There are many theories about how this occurs, but the point is that it’s causal and not just correlated. One way IL-6 does this is by decreasing the cells that regulate the immune system from attacking itself (Treg cells) [2].

If you decrease IL-6, you will decrease the progression of many inflammatory conditions.

What Are Healthy Interleukin-6 Blood Levels?

In healthy subjects, IL-6 blood levels are barely detectable and range between 2 – 6 pg/ml. Another study mentions that healthy people have a median level of 0.5 pg/ml [208]. Depressed people had IL-6 levels about 1.78 pg/ml greater than healthy people [209].

Chronically elevated levels will cause harm in the long run. One study checked for diseases of aging and IL-6 levels. After adjustment for potential confounders, they found that having a high interleukin-6 level (greater than 2.0 pg/ml) twice over a 5-year period nearly halved the odds of “successful aging” at the 10-year follow-up and increased the risk of future heart disease and overall death [210]. (They only checked IL-6 levels twice).

Note that all of the people in the study were free of cancer and heart disease, so these weren’t what you’d call really sick people. They defined successful aging as “being free of major chronic disease and with optimal physical, mental, and cognitive functioning” [210]. I couldn’t define it better myself.

In another study, patients hospitalized for moderate bacterial and viral infectious diseases were checked for their cytokines. IL-6 was associated with a bacterial rather than a viral infection [213]. This is useful information when trying to figure out if someone’s problems are more likely viral or bacterial. In the study, people who took antibiotics had their IL-6 normalize after only 3 days (from 39 to 2) [213, 214]. The average IL-6 level for people with bacterial infections was 237 pg/ml. It was undetectable for viral infections [215].

I had a client check her IL-6 levels and her result was 528 pg/ml. This client had high IL-6 at 528 pg/ml and her hs-CRP was 0.4, which is very low. Therefore, IL-6 is the main driver CRP, but CRP is not a reliable indicator, as you’ll read below.

It should be noted that these numbers do not take into account the local IL-6 levels at the site of inflammation, which is largely unknown since they are mostly not experimentally accessible [50].

This can be the case where inflammation is more localized, so it won’t be picked up by these tests. Therefore, not having elevated inflammatory cytokines isn’t definitive, but if you do have elevated cytokines, it’s certainly telling.

CRP Isn’t Such A Reliable Factor

The most common way of checking inflammation – high-sensitivity C-reactive protein (hs-CRP) is not very relevant.

CRP is produced by the liver AND fat cells [216], so it makes sense that it’s more elevated in overweight people [217].

IL-6 will be elevated moderately if you are overweight since IL-6 is also secreted by fat cells.

CRP will only show a spike, however, if you run marathons (maybe), have an acute infection, or incur a serious injury. These are situations where IL-6 spikes.

However, in most people with chronic inflammation who are thin, CRP will likely come back normal.

My CRP levels were low even when I was experiencing chronic, low-grade inflammation, and I didn’t experience fever.

To illustrate my point, many studies show IL-6 is elevated with IBS [17, 18]. However, when a study checked for hs-CRP and IBS, the differences were significant but very small.

No doctor would even blink at the difference between 1.17 and 0.72. They would tell you that you are perfectly healthy.

C-reactive protein correlated only weakly with interleukin-6 levels in people with cirrhosis [212].

In another example, although CRP levels were significantly lower in SLE than in Rheumatoid Arthritis, the concentrations of circulating TNF-alpha were higher in SLE [54].

So we see from the IBS example that hs-CRP can tell us something, but we also see that in conditions with elevated IL-6, CRP can be more or less normal.

This is why we shouldn‘t rely on hs-CRP as an indicator of inflammation and should take other tests.

There are two types of IL-6. One is called “Classic signaling” and the other is called “Trans-signaling.”

IL-6 Classic signaling is needed for regenerative and anti-inflammatory roles.

IL-6 Trans-signaling takes place when IL-6 receptors (soluble IL-6 receptors or sIL-6R) in the blood bind with IL-6. This kind of cellular activation by IL-6 is what causes inflammatory problems [50].

In models of inflammation, autoimmune diseases, and inflammation-associated cancer, blockade of IL-6 trans-signaling was sufficient to block the inflammatory progress [50].

Eternus Review: The Science Behind This Anti-aging Formula

All About SIRT3 + 20 Natural Ways to Increase it