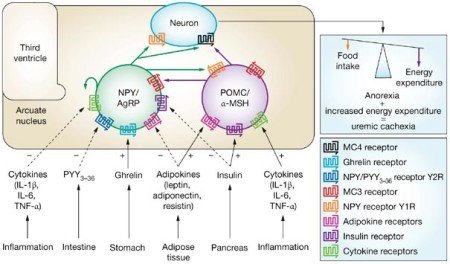 If you’re having weight problems, chronic inflammation, CFS or CIRS, then a-MSH has a very significant role in your problems.

What is Alpha-Melanocyte Stimulating Hormone (a-MSH)?

The two most prominent roles that a-MSH has in human physiology is in causing weight loss (by reducing appetite and increasing energy expenditure) and by increasing tanning.

a-MSH is a hormone that increases melanocytes, which are skin cells that cause you to become tanned.

Different levels of MSH are not the major cause of racial variation in skin color. However, in many red-headed people, and other people who do not tan well, there are variations in their hormone receptors, causing them to not respond to MSH in the blood [2].

MSH is an anti-inflammatory hormone and helps build a tolerance to our own and foreign proteins [3, 4, 5].

Where Most of Our a-MSH is Produced

a-MSH is produced in the hypothalamic arcuate nucleus and in the nucleus tractus solitarius of the brainstem [6], where it functions to reduce appetite and increase energy expenditure [6].

a-MSH is primarily produced by the intermediate lobe of the pituitary in most of the mammals, but in humans, a-MSH detected in the blood probably originates from the Arcuate Nucleus in the hypothalamus [7].

Note: I interchange a-MSH with MSH.

MSH is an anti-inflammatory hormone that also functions as anti-microbial and anti-fungal [6].

Receptors responsive to MSH (MCR1) are found on cells of the immune system, which mediates the robust anti-inflammatory properties of a-MSH, which include the prevention of Th1 responses and the induction of T regulatory (TREGS) responses [11].

MSH improves nitric oxide delivery in our blood vessels [12], which can help with blood flow.

MSH reduces abdominal fat [16] and may be the most potent weight reducer.

Gamma-MSH, which is different but correlated with alpha-MSH, decreases blood pressure [20].

Increases in MSH lead to increased T3 in rats [22].

MSH in the amygdala (by activating the MC4R) induces anxiety, inhibits appetite and activates the HPA axis [26].

However, MSH decreases anxiety brought on by inflammation (IL-1b) [29] – presumably by decreasing inflammation.

MSH is Higher in CFS

It makes sense that people with CFS are more likely to have higher MSH. Here’s why:

Indeed it’s the case that in 55 people with CFS, a-MSH levels were higher than healthy controls.

The stress-induced increase in a-MSH probably originates from the pituitary gland [35].

In CFS, there may be a disorder of the hypothalamic dopaminergic neurons, and that this could further affect pituitary hormone secretion. Although the structure of the intermediate lobe is less clear than that seen in rodents,

As time went on in people with CFS, their a-MSH declined. This may be a result of a dysfunction of the pituitary cells that release a-MSH (melanotrophs) because of prolonged stimulation by stress. In a rat model, melanotrophs subjected to continuous stress for more than 5 days showed degenerative features due to hypersecretion of α-MSH, and the raised a-MSH levels fell five days after stimulation [36].

Thus, melanotrophs in humans with CFS are likely to become exhausted and impaired by prolonged stress. It is also possible that the melanotrophs become desensitized following prolonged stimulation, or that the prolonged high level of a-MSH may activate an unidentified feedback system from the periphery.

Hence, people with CFS may have “Pituitary Fatigue.”

People who have a multitude of symptoms and blood markers – and who respond to cholestyramine often are suffering from environmental illness.

However, I’m not sure where he gets this information because he doesn’t cite a study backing this range. Actually, I’ve only found studies that contradict this range in healthy people.

People with histamine issues are most often underweight, have low blood pressure, experience flushing and have increased pain sensitivity.

While histamine has a role in these, activation of an a-MSH receptor (MC4R) can cause the same symptoms [6].

People with chronic stress and/or inflammation will have the MC4R receptor activated, which then leads to flushing, weight loss, lower blood pressure and increased pain [6].

Melanotan II and MSH2-Pro are synthetic analogs of a-MSH. Usage has been shown to produce tanning and has aphrodisiac effects in preliminary studies and clinical trials [71].

MSH acts through a variety of receptors, but the most significant is the Melanocortin 4 Receptor (MC4R).

SelfDecode discusses a variety of SNPs in MC4R, with additional information about this gene.

Variations in these SNPs are associated with weight changes.

Why Some People May Have Low MSH

Interestingly, the body can create antibodies to a-MSH by mistake.

Certain proteins in E. Coli found in the gut (both friendly and disease-causing E Coli) are similar enough to where the immune system confuses the two and creates antibodies to a-MSH [61].

It’s thought that this is one reason for the low a-MSH levels detected in anorexic subjects (because autoantibodies reduce a-MSH) [61].

What’s really interesting is that these antibodies can sometimes improve the function of a-MSH (by being a carrier) instead of reducing it [72].

When antibodies (proteins) attach themselves to a-MSH strongly, they block its function, but when they latch on to it weakly, they help its function [72].

Rats exposed to chronic stress had increased levels of antibodies and they attached more strongly to a-MSH, which reduced its levels [72].

This is one link between stress and inflammation.

Antibodies are also increased by gut inflammation, but it doesn’t cause a stronger binding to a-MSH, which means that it improves its functioning [73].

This is one reason why intestinal inflammation often causes weight loss.

People who can’t gain weight have overactive POMC neurons in the hypothalamus and a-MSH.

That means you need to take action that decreases POMC/MSH.

Drugs
4.3
30
My Experience While On LSD: In A Word, It’s Egocide.
Podcasts
0
Dr. David Rabin: All About Microdosing
Foods
0
Food Additives, Histamine & Wheat