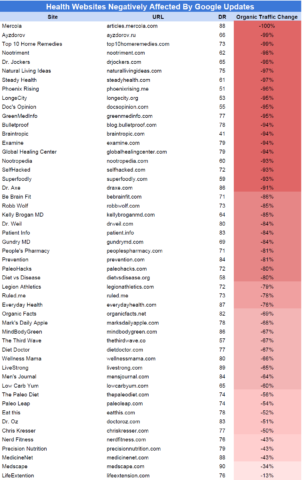 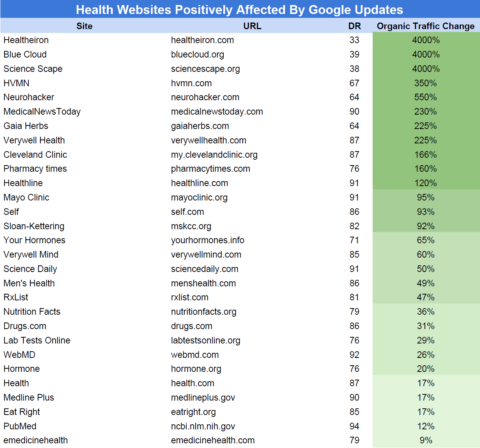 Why I Am Publishing This

There seems to be some naive people in the SEO world that think that the declines are mostly due to technical issues. Most of the larger websites here, including SelfHacked and Examine, consulted with many SEO experts and implemented a variety of changes, while our traffic continued to decline after each successive update.

Some of the websites that declined may indeed have some technical SEO problems, but Google is smart enough to not place much emphasis on this.

When looking at all the data, it’s hard for me not to think that up to 95% of the variation in health websites have nothing to do with anything SEO technicalities.

In fact, the first post I ever read about SEO in my life was a year ago. I always believed that if you create the best content, Google will rank you. But after these changes, I studied SEO very intensively in the past year and made a bunch of changes to the website.

We focused on the most important aspects such as site speed, user experience, quality and authoritativeness of the content. We also fixed significant technical SEO issues. Examine and other sites did the same.

Those SEO changes actually helped us quite a lot with the ‘dumber’ search engines such as Bing and DuckDuckGo, but our Google traffic kept going down. After a year of searching and consulting with experts, and looking at the industry as a whole, I’ve come to realize that this is not a technical SEO problem.

Google is only getting smarter and it would be stupid to think they are caring about irrelevant technical SEO details.

Google is simply not ranking any sites that are not on their “approved” list. Whether they did this through algorithm or manually is irrelevant, as the results are the same.

This is a shame because sites like SelfHacked work tirelessly to create the most thorough and reliable information out there and we have the most rigorous process in creating content in the health industry.

Google has gone from waging a battle against clear falsehoods, to waging war against their “unapproved truth”.

Our traffic from DuckDuckGo looks similar to non-Google search engines:

Here’s our traffic from Google as we worked to fix outstanding SEO issues:

Now, almost all of our searches from Google are either “branded”, non-medical or health topics, or longtail keywords that the mega-brand websites haven’t written about.

It’s important to mention that there are hundreds of smaller sites that have disappeared but I haven’t brought them down because they are too small. However, cumulatively, they can make up quite a lot of traffic. They have disappeared without anyone noticing.

While the sites that didn’t do well can be classified as “alternative”, in actuality, there’s a huge variance in how these sites operate. At SelfHacked, we try to not be classified as part of any discipline. We only care about facts, not opinions or beliefs.

We state as accurately as possible, in a lay person-friendly way, what the science on a subject says, without injecting our opinions. However, since Google has classified us as “alternative”, then I guess that’s what we are.

Why Did I Set 1.5 Years as the Threshold

Google’s medic update first came out on August 1st, 2018. However, it’s possible smaller medic updates came out before, so I pushed the timeline back another 6 months to get a bigger picture of traffic.

Also, some sites like Examine got hit for seemingly technical reasons initially before the medic updates happened. As they fixed their technical issues, their traffic should’ve gone up. So it’s misleading to just look at their traffic from right before the update because it doesn’t take into account that they fixed technical issues and still declined even further. This is why I set 1.5 years as the threshold rather than 1 year.

How We Came Up with Percentage Decline

Since Google’s updates can cause fluctuation, we took the highest point of traffic in the past 1.5 years, and compared it to traffic as of August 22nd, 2019.

Very large websites will have a domain rating of over 85. Two years ago, Mercola and Dr Axe were the most trafficked alternative health websites. Dr. Axe has a DR of 86 and Mercola 88.

The website with the highest domain rating in the health and medical industry would be WebMD at 92.

However, Google has ignored a websites domain rating when coming out with these changes. Mercola got hit the hardest and has the highest domain rating in the “alternative” health space at 88.

It’s important to note that we didn’t cherry-pick which sites to include or exclude to fit our theory. We excluded sites that never got significant SEO traffic. We didn’t have any hard cutoff because we also included historical traffic and brand recognition as well in deciding who to include.

We also excluded a few sites that changed their domain name in middle of all of the updates, so it was difficult to see exactly what change the decline had. For example, “healthygut.com” was excluded because it was formerly SCDlifestyle.com and while the owner says his traffic declined by over 50% by the updates, it’s hard for me to tell how much with ahrefs.

The Percentages are Underestimating Declines (they are actually higher)

In many of these cases, the declines can be significantly higher than it seems. For example, Examine, Greenmedinfo, and KellyBroganMD only get “branded” search results show up. What this means is that the only way you will find their content is by typing the domain name of the website with the search query.

“Ashwagandha SelfHacked” would be an example of a branded search, or even simply “Selfhacked” or “Self hacked”.

Examine claims that almost all of their traffic is from branded search results, so even though it shows a “94%” decline, it’s actually closer to 98%-99% when you exclude the branded searches.

In the case of KellyBroganMD, all of her searches are currently branded, which means people are typing into Google her name. So in reality, her traffic decline is close to 100%, but it only shows 85% here.

Searches that are not health or medically related

Another reason why these declines are even more than they seem is because Google has stopped ranking these sites for terms that can be considered health or medically related.

For example, at SelfHacked, most of our search traffic from Google is from food results, such as purple sweet potatoes.

Sites like WellnessMama declined by ‘only’ 66% because their content is more diverse. A lot of their posts have to do with recipes, product reviews, and foods. They rank for terms such as “bone broth”, and their article is about how to make homemade bone broth. This isn’t a medical topic, so they still rank for it. For a topic like “colloidal silver” (a health/medical topic), they don’t show up in the top 100 results of Google.

This is why sites like SelfHacked and Examine got hit particularly hard – because we don’t have many posts about foods or recipes.

In their quest to censor websites, they not only downranked domains, but they also downranked traffic from terms that can be considered health or medical.

If you notice, Lifeextension.com doesn’t seemed to have faired so poorly. You may think that they are doing something right, but that’s not the case. For some reason, Google algorithm didn’t penalize ecommerce sites as much, and actually elevated quite a few of them. Life extension sells a lot of supplements on their site and they are more of an ecommerce site than a content website. But by being ecommerce, they were able to escape some of the harshest treatment.

Percentages Can be Misleading

Percentages can also be misleading in the case of other websites. For example, Healthline increased by 120%. However, in absolute terms, they increased by 57 million searches a month. This number alone could account for half of the search traffic taken away from all of the “alternative” health sites combined.

So when these huge institutions have modest percent increases, it can actually be quite big, since they were already large to begin with.

As you notice, the trend is clear that mega-brand institutions have been doing very well in the past 1.5 years, and especially in the past year.

They’ve basically dominated all the top 10 health or medical search results since Google hit the last nail in the search coffin on July 12th 2019.

They comprise established institutions such as WebMD, Healthline, and Verywell (subsidiary of an About/Dotdash). In addition, they comprise of hospitals, governmental institutions, professional societies.

These sites will rank even if their content is inaccurate, not thorough, unsourced or thinly referenced, and display very little authority (E-A-T), beyond the name of their institution.

As mentioned, sites that combine ecommerce and health content seemed to have done well in this update.

Sites like Gaia herbs, HVMN, Neurohacker don’t have the best content – as it’s not their specialty, but they have done very well in the updates because of their ecommerce status. My guess is that this is short-lived and Google will punish them in the next update.

Interestingly, there was one vegan promotion site that has done well, called nutritionfacts.org.

I personally think this website is quite biased and dogmatic, but it is a non-profit and is run by an MD.

I’m not aware of other vegan health sites that create content for search engines, but it’s interesting that NutritionFacts is on their “approved” list.

There’s a number of sites with explosive growth that were started in 2019 that are promoting dangerous and pseudoscientific ways to increase muscle – and penis size. Healtheiron, Bluecloud, and Science Scape are some of the largest of these websites.

Healtheiron and Bluecloud are getting 300-350k monthly search results from Google.

In both of these cases, it seems like the buyers bought existing domains in a different niche. For example, prior to 2015, Bluecloud.org had something to do with Indian reservations. It was used for bodybuilding information towards the end of 2018, so it presumably hasn’t been classified as a health or medical website yet, and therefore hasn’t gone through Google’s health censorship algorithms.

Possibly, part of their algorithm has to do with what sites are linking to your site. If they see Mercola link to you, as he does to SelfHacked, you are more likely to get tagged as “alternative” and be downranked.

My guess is that since these sites are too new, Google’s algorithm hasn’t had a chance to categorize them as health websites. I believe that the clock is ticking and they will get penalized in time.

The main reason why sites like these are ranking even with their low DR (in the 30’s) is simply because their better competition got significantly downranked by Google.

Usually, the mega-brand institutional sites don’t have posts on research chemicals. With their more established competition taken out, these are the only sites that show up now.

Conditions
4.7
35
All About Regulatory T cells (Tregs) & How to Increase Them
Diet
3
10 Ways to Curb Your Hunger + Approaches That Didn’t Work
Gut
0
5 Gut Killers + 1 Silent Killer You Might Not Know About