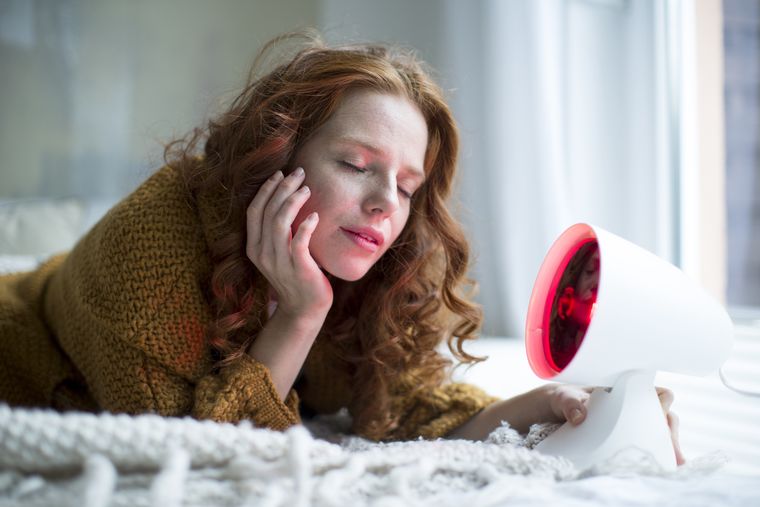 Low-level laser therapy decreases inflammation and pain wherever it’s applied. Read on to learn about the many potential benefits of LLLT.

When it comes to the benefits of LLLT, there are simply so many studies out there that it would be impossible to list them all!

Nonetheless, to give you a sense of the sheer number of effects that LLLT can have on your health, I mostly stuck to referencing the first studies I found when looking at each of these effects (many of these have dozens of studies backing them up):

Note: For an even more in-depth look at the mechanisms and benefits of LLLT, check out my interview with Dr. Hamblin, the world’s leading expert on Light Therapy.

LLLT works by hormesis and invoking your body’s stress response, specifically nitric oxide/free radicals. Therefore, like any kind of hormetic tool, use it wisely and in moderation.

LLLT increases free radicals (ROS) — but the level of ROS produced by LLLT in normal cells is actually beneficial [71].

I mainly use LLLT on my brain, but I have also used it for many other things. For this section, I’ll be focusing primarily on its mechanisms with regard to the brain.

Some of the mechanisms are similar to methylene blue. Read my post about how to use it.

What Effects Did I Experience?

I used to caution about C60, but not anymore. I asked Dr. Hamblin, the world expert on Light Therapy.

Where To Use It On The Head

Other Places I Use it

I mainly use it on my brain, but sometimes other locations.

How To Use It

I recommend using this before bed, as it causes fatigue in many users.

I suspect that the reason for this is because it acutely increases TNF-alpha. However, while it may increase TNF-alpha levels in the short term, in the long run it actually down-regulates the production of TNF-alpha, leading to better health. Read my posts about how inflammation and TNF-alpha are related to fatigue.

First use: Place on each spot on the head for 10 seconds and switch to a different spot. Cover the whole head, except the back. Total time should be 2 min.

Second use: If you felt tired after the first usage then continue at that dosage for a week. If not increase by 10 seconds to a total of 20 seconds per spot and 4 minutes in total.

If you feel tired and groggy the next day, you had too much. If not, keep on increasing the dosage by 10 seconds until you hit 2 minutes per spot and a total of 15 minutes.

If you feel groggy the next day and only took 30 seconds per spot (less than 6 minutes in total) then it means you have an inflammatory and/or mitochondrial issue. LLLT will help with it.

If you feel tired after 2 minutes of putting it on your head this also means you likely have an inflammatory and mitochondrial issue. Again, LLLT will help with it.

Use every other day. I recommend every third day if you’re generally functioning pretty well. If you’re taking a lot of other supplements then use once a week perhaps. That’s what I do. The benefits are abolished if used daily for a few weeks.

An alternative way of using it is to put it on your head in the daytime for two minutes in total. This isn’t enough to make most people tired, but it still stimulates Cytochrome C Oxidase. I would definitely recommend using it this way if your sleep is disturbed by LLLT.

Last, don’t worry about the detailed instructions or screwing up. This is very safe if you use it even somewhat right. The reason I give these instructions is so that people with underlying inflammatory issues aren’t scared off if they see some negative effects.

When Will You See Results?

LLLT is like exercise – benefits are accrued and realized after the healing stage, but there’s usually a noticeable effect the next day.

If you don’t notice anything from laser therapy then congratulations – you likely have healthy mitochondria and low levels of inflammation. It still can help you, though. Gwern didn’t notice any effect, but still had significant increases in productivity the days he used it.

Side Effects and Theoretical Long-Term Risks

The following are side effects only if you’ve used too much on the brain:

Theoretical long-term risks for usage on the brain:

Long-term risks are unknown since there’re no human studies that have been going on for decades. However, there’re reasons to think that brain cancer risk is both decreased and increased. I haven’t seen this discussed anywhere, but my knowledge of cancer research leads me to this opinion.

Brain cancer risk is possibly increased in my opinion as a result of the growth factors and stem cell increase. LLLT also increases a transcription factor (NF-kb), which is implicated in cancer initiation and progression [89].

Since it decreases inflammation, oxidative stress and improves mitochondria, it may decrease your risk of developing a tumor, to begin with, but if you already have a tumor or get a tumor, the increase in growth factors will make it spread more quickly.

Again, there’re reasons to think it will cause and prevent cancer, but I’m leaning more towards causing it (where ever it’s used in the body). Obviously using it once won’t matter, but every other day for the rest of your life might be significant.

For every 100,000 people in the United States, approximately 221 are living following the diagnosis of a brain tumor, but only 20 – 25% of that number is malignant.

Approximately 0.6 percent of men and women will be diagnosed with brain and other nervous system cancer at some point during their lifetime, based on 2008 – 2010 data [90].

If you have a very high incidence of cancer in your family, specifically brain cancer, then this might not be a risk you want to take, since we don’t have long-term studies on people yet who use it on their brain.

I’m extremely cautious, even though I probably don’t come off as such. For me, I feel the risk is worth it. I think the increased cancer risk is small at the end of the day and the benefits outweigh the risks by a good margin. That said, it’s likely wise to take breaks if your brain is already functioning well.

If you think about it another way, however, intelligence is highly correlated with lifespan [91] and disease reduction [92]. This is probably because more intelligent people make more money and can take better care of themselves better [92] (by understanding health information, etc.). Neuroticism is also associated with increased mortality (risk of dying) [92] and LLLT decreases neuroticism.

So life is one big trade-off and this is a risk I’m willing to take and I think most of the population should also take since it’s such a powerful tool. It’s only a risk insofar as we don’t know the long-term effects.

I also take supplements that inhibit cancer growth, so hopefully, this balances the risk increase. In general, my genetics makes me more prone to autoimmune conditions rather than cancer, so the risk is especially worthwhile for me.

Vielight devices are good to use for brain function. If you have too much hair, there will be fewer benefits.

The Joov light is better for nonbrain areas of your body.