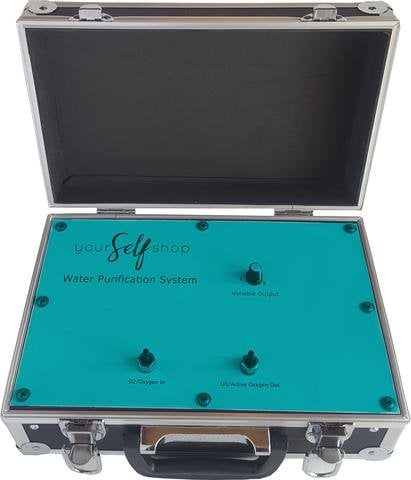 Since the beginning of time, we’ve put health concepts in tiny bins and labeled them as “good,” or “bad,” like high-fat diets, or antioxidant supplements…until we realize these little cubbies aren’t always so black and white.

There are two main points to remember when someone categorizes ozone as evil: all ozone isn’t the same (atmospheric ozone is not the same as pure, therapeutic ozone), and it’s the dose that makes the poison (which can be said about most beneficial therapies).

By grouping atmospheric ozone gas and ozone therapy together, we’ve turned our backs on the beneficial effects ozone therapy has on certain health disorders.

I think we’ll see more people jumping on the ozone therapy bandwagon, following in the footsteps of Healthcare in Europe.

Ozone is an inorganic chemical compound made up of 3 oxygen molecules bonded together. Ozone is most well-known for its presence in the stratosphere, acting as a barrier against highly damaging UV rays from the sun (blocking anywhere from 93%-99% UV radiation), allowing advanced life to exist [1].

While ozone is most common at high altitude in the stratosphere, it can be found in low concentrations in the entire atmosphere [1].

At ground level, ozone is produced from the burning of fossil fuels reacting with sunlight. Here, ozone is composed of part smog and is harmful to human health [1].

However, studies show therapeutic ozone, when it is pure, and when it has not been mixed with the atmosphere’s smog, has therapeutic effects on the human body at low concentrations. It is able to boost antioxidant systems, treat wounds, relieve pain, and act as an antibacterial among other benefits [2].

In small doses, ozone becomes medically active and is therapeutic, triggering several useful biochemical mechanisms and reactivating the antioxidant system, without any toxicity or side effects [3].

Ozone therapy is able to inactivate viruses, fungi, protozoa, and carcinomas in diseased cells by destroying their outer membrane [2].

Ozone is powerful, and helps with many chronic infections, even possibly treating Ebola (from what Dr. Robert Rowen experienced). There aren’t scientific studies relating to Ebola, only his experience, but his story is intriguing.

Nerves manually crushed in the laboratory prior to the ozone treatment showed improved nerve health in comparison to the control rats treated with saline, with thicker fatty insulation (myelin sheath) and greater sensitivity (not by a significant figure, but still shows promise of potentially improved health) [5]. With further treatments, improvements may have been much greater.

Ulcerous lesions in the foot (necrotic lesions, common in diabetics) can be successfully treated with ozone therapy [6].

5) Could Increase Oxygenation in Most Hypoxic Tumors

Tumor hypoxia is an adverse factor for chemotherapy and radiotherapy [7].

Despite being administered during a short period, ozone therapy improved oxygenation in most hypoxic tumors. This suggests the potential use of this therapy as an adjuvant in chemo-radiotherapy [7].

Ozone therapy prevented the buildup of free radicals in the kidney from ESW and significantly reduced physical damage sustained by the kidney compared to a control [8].

Ozone therapy is useful in boosting bone regeneration that is typically slowed by diabetes [10].

In rats with diabetes, ozone (plus a bone transplant) spurred bone healing, growth, and recovery [10].

In rats, inflamed and injured kidneys appeared to be healed by ozone, improving kidney structure to normal standards and increasing their efficiency [11].

The wound appearance noticeably improved, as well as the overall quality of life of the patient in comparison to the control after 8 days [12].

Ozone therapy successfully treated testicular ischemia-reperfusion (tissue damaged from the return of blood supply after prior lack of oxygen) injury in rats [13].

General testicular health was overall improved in the ozone-treated group, increasing instances of apoptosis and reducing communication protein activity (NO synthase activity). The application was most successful when directed applied locally [13].

12) Reduces Liver Damage Caused by Obstruction in the Biliary Tract

Lower levels of liver fibrosis and inflammation (including perioral inflammation) were observed in the ozone-treated group compared to the sham and control groups. There were also no traces of cirrhosis [14].

Proteins that affect inflammation (TNF-α and IL-1β), and other proteins (MDA and MPO) increased in activity from the ozone treatment as compared to the non-treatment and control [16].

Then in comparison with colon therapy group and control group, ozone therapy plus colon therapy resulted in more rapid alleviation of symptoms and better histological improvement without any adverse effects [17].

Ozone treats lower back pain that may result from herniated disks [18].

A review of controlled studies on low back pain using ozone therapy shows ozone therapy as reducing short-term and long-term pain associated with the condition [18].

Ozone may help activate the body’s immune system by being absorbed in blood cells and soft tissues and is spread throughout the body as messengers [3].

The reactivation of the body’s antioxidant system is thought to be important in treating chronic renal failure (seen in rat study) [19].

The rats given ozone had fewer lesions, lower arterial pressure, and generally hindered the progression of disease compared to the control [19].

It was proposed that ozone is an activator of antioxidant enzymes.

Ozone treats a variety of wounds and ulcers and is an excellent disinfectant [21].

No resistance to O3, so far, has been demonstrated, and ozonated products can be used 3-4 times daily for external genital areas, for venereal infections, and several anorectal affections [21].

Others have managed their rosacea with ozone therapy [22].

The most common ozone therapies include:

Other Ozone Therapies Include:

There may be some vein-related issues when doing ozone therapy through IV. Many people have found that IV therapies may be more effective initially (show relief of symptoms faster). However, they may opt to do home therapies instead (ear insufflation, rectal and vaginal insufflation, oil breathing, and ozone water) to avoid the high cost of in-clinic therapies, and avoid side effects. Home therapies usually take a bit longer than IV therapies to show an effect but are usually just as effective.

Side Effects of Ozone Therapy

Ozone’s effects are with minimal and preventable side effects [2].

In Germany, where ozone therapy is commonplace (over 7,000 doctors in Germany use it daily), there are very few incidences of side effects. Ozone generators are also used in ambulances for treatment of stroke victims. The incidence of permanent paralysis is less common in Ozone patients than in similar non-ozone patients.

Of course, you should always talk to your doctor before starting ozone sessions.