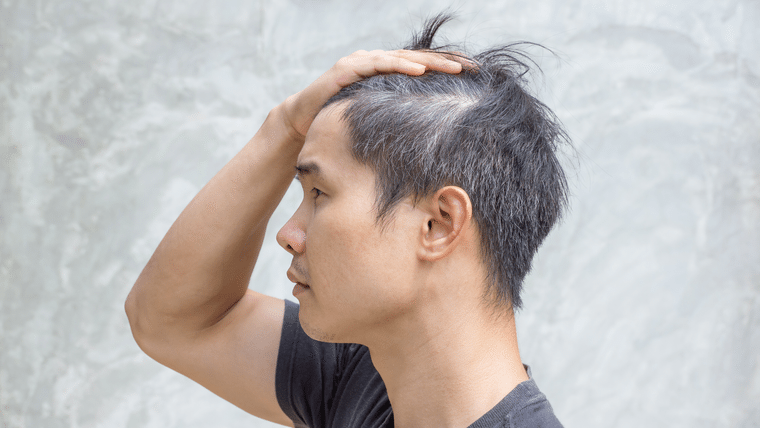 Learn why hair turns gray, the role hydrogen peroxide plays, and what dietary and lifestyle choices you can make to delay it.Read on to discover 24 things you can do to slow down your hair turning gray.

I wrote this post because there was little information on the internet about how to solve graying hair, and what was available didn’t seem to be supported by science. Almost all of the information is gleaned from more than a hundred scientific papers.

The Cause of Graying Hair: Hydrogen Peroxide

Another enzyme, Methionine Sulfoxide Reductase A and B (MSR A and B), normally helps hair follicles repair the damage caused by hydrogen peroxide. But as we age, the levels of these enzymes also decline, and they can’t do as much damage control. The combination of higher levels of hydrogen peroxide and lower levels of MSR A and B make it harder for the body to produce enough of another enzyme, tyrosinase, which facilitates melanin’s transfer to the hair shaft (Melanin gives the hair its color).

The Causes of Excess Hydrogen Peroxide

According to recent scientific studies, low levels of catalase may play a role in the graying process of human hair, since catalase breaks down hydrogen peroxide. If catalase levels decline, hydrogen peroxide will increase and accumulate at an accelerated clip.

It may also be the case that certain substances can protect the damage done by hydrogen peroxide.

Catalase has applicability to other diseases. Low catalase may be a causal factor in diseases such as diabetes, schizophrenia, and atherosclerosis. Hydrogen peroxide has been found to damage pancreatic β-cells and cause insulin resistance and removal of it has been shown to increase insulin signaling.

In Summary: The 5 Mechanism’s To Prevent Graying Hair

So there are 5 possible mechanisms by which you can block/clear hydrogen peroxide and delay graying hair. These are:

Superoxide dismutase (SOD) converts more harmful free radicals the less harmful reactant, hydrogen peroxide. If you have too much SOD and too little glutathione peroxidase (GPx) and catalase then that will explain the issue.

Now that we know graying hair comes from H2O2 as a result of low catalase, the question is why people have low catalase.

Inflammation is a significant cause of this, as TNF and IL-1b decrease catalase [3, 4]. So make sure to read those posts about how to decrease inflammation.

Graying hair isn’t life-threatening, so it doesn’t cause for drastic action. While there’s a lot of things that can be done – much more than listed here – I delineated the most important and sensible solutions that can delay graying hair. These solutions offer the most bang for your buck. They are:

All of these actions increase Glutathione peroxidase and Catalase.

Exercise is probably the most effective way of increasing catalase and glutathione peroxidase (we want these).

Eating lots of vegetables may also be helpful since many raise catalase and glutathione peroxidase. Unless you’re into popping lots of pills or taking lots of herbs, there’s no way around this one. Mushrooms, dark chocolate/cocoa, and some fruits can be beneficial as well. Vegetables also have phenolics which inhibit xanthine oxidase.

Eating whole grains and seeds like sesame can inhibit xanthine oxidase because of the phytate.

Stress and sleep deprivation both lead to the whitening of hair by decreasing catalase. Astragalus is an effective method for preventing a stress-induced decrease in catalase, in addition to mindfulness, breathing exercises, yoga, and meditation.

Heavy metals like mercury and lead can also decrease catalase. Excess iron can do the same, which can be obtained by iron-rich foods like red meat.

Excess alcohol decreases catalase. In moderation, there might be a compensatory response which would prove beneficial. I’d say one beer or equivalent alcohol consumption would be considered moderation and shouldn’t be of concern.

Smokers were found to be four times more likely to begin graying prematurely.

UVA from the sun decreases catalase. Make sure to get adequate sun, though. 30 – 60 min is adequate.

All of these substances affect the body in multiple positive ways. How much you take of each depends on multiple factors, so I can’t give recommendations.

You can scavenge hydrogen peroxide directly with lipoic acid and cysteine. Cysteine is found in eggs and sesame in high concentrations, as well as in many other foods. We may not have enough since the world we live in might place a higher burden on cysteine to detox toxins. NAC is a supplement that can increase cysteine. Lipoic acid would need to be supplemented in pill form for this purpose. My guess is garlic would also be useful for because of its thiols.

You can lower homocysteine with B-6, B-12, and folic acid.

Fo-ti is a traditional remedy for graying hair, but I haven’t seen any science behind it. I’m slightly concerned about its potential liver toxicity. I know herbal hype when I see it, but this doesn’t seem to be hyped. I’d wager that it works, but that’s just faith. I’d use it as a type of panic button in case my other methods don’t work.

These are all extremely safe (with the exception of fo-ti). I have tried everything I have listed here at much higher doses.

Go to SelfDecode to learn how you can have your own genetic make-up tested for hair graying susceptibility.