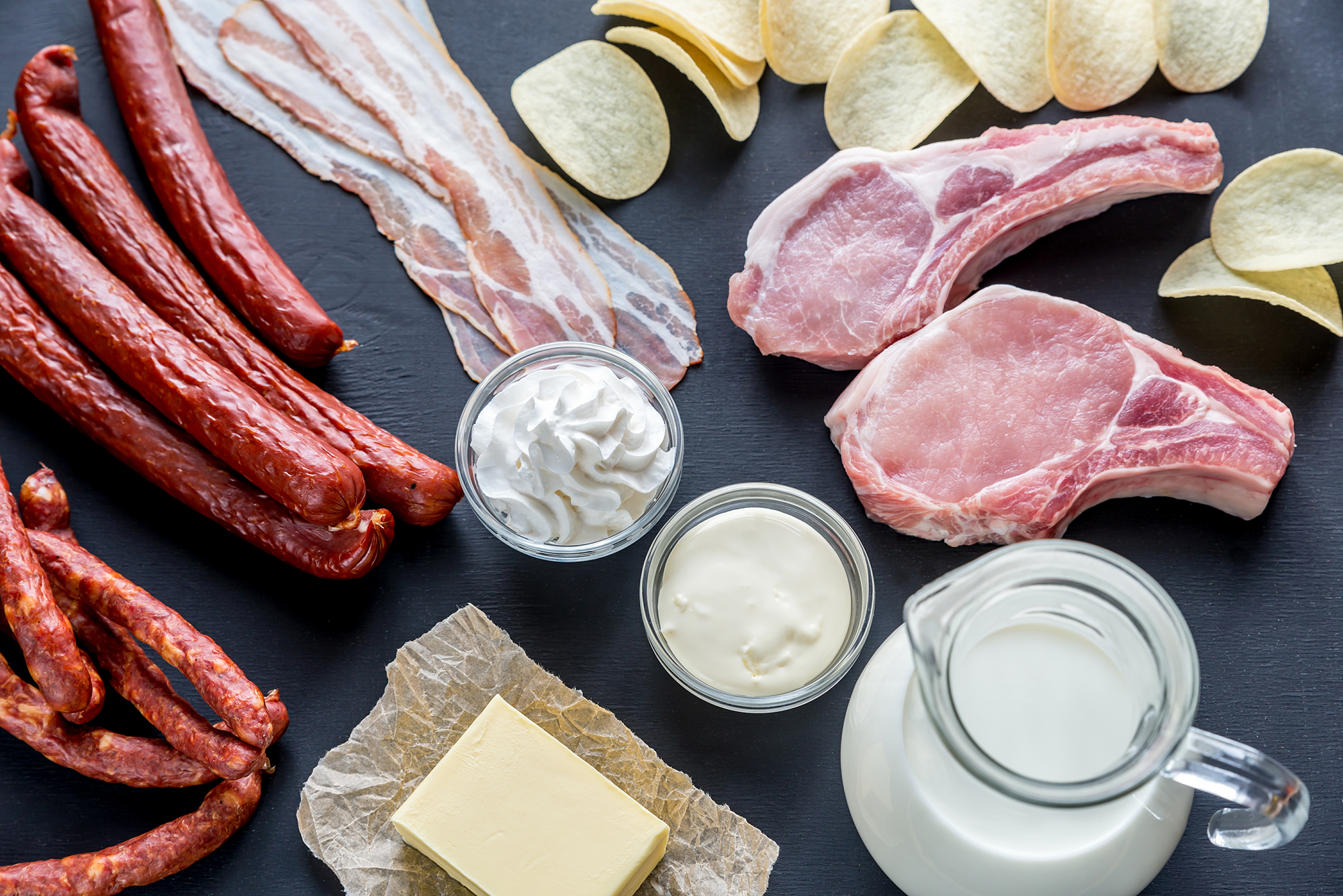 Saturated fat, in excess, can increase the risk of a variety of health problems. Read this post for a summary of scientific research into this topic and to hear my own personal thoughts on the topic.

First, I would like to start out by saying you should follow whatever diet you feel best from. I think people are built differently and benefit from different approaches. Many do great on consuming lots of saturated fat, while others don’t. Personally, it’s very bad for me.

Second, see my article on getting into ketosis.

Saturated fats like Palmitic acid [1], Myristic acid [2], Lauric acid [3] and Stearic acid [4] all cause insulin resistance. These are found in oils that some people view as beneficial such as coconut oil.

Palmitic acid has the most negative research behind it, but the others aren’t spared.

A high-fat diet rich in saturated fatty acids (SFA) increased the number and inflammatory activity of macrophages in fat cells [6].

“Taken together, these data show that SFA is particularly potent in recruiting and activating immune cells in fat tissue, thereby increasing inflammation” [6].

By decreasing mitochondrial function in muscle tissue, SFA consumption would lead to decreased oxidation of fat and glucose, thereby increasing their accumulation in tissues and blood [6].

In a study that tried to mimic the effects of low carb diets in rats concluded the following:

“Taken together, these data show that a lack of dietary carbohydrates leads to glucose intolerance and insulin resistance in rats despite causing a reduction in fasting glucose and insulin concentrations. Our results argue against the beneficial effects of LC-HFDs on glucose and insulin metabolism, at least under physiological conditions. Therefore, use of LC-HFDs for weight loss or other therapeutic purposes should be balanced against potentially harmful metabolic side effects” [7].

The Harms of Saturated Fats (In Excess)

I don’t believe consuming saturated fat in moderate amounts will hurt, but consuming excess amounts can potentially raise your risk for disease.

According to the World Health Organization, the evidence is “convincing” that consumption of palmitic acid increases the risk of developing cardiovascular diseases, placing it in the same evidence category as trans fat [8]. The WHO has some of the best and brightest scientists working for them and they aren’t influenced by industry.

A misconception that some people have is that most of the studies use hydrogenated saturated fat and in some way, the fats from the oils they consume are magically different. This is a fallacy.

What’s My Position on Saturated Fats?

First, it’s important to keep in mind that most of these studies are dealing with excess consumption of saturated fat.

I don’t advocate a low-fat diet since it’s not either optimal. I find no harm to myself when I eat under 30g of saturated fat a day (recommendations by mainstream health organizations is to get under 15g a day).

The fat I get from foods is from whole food sources or from healthy oils like extra virgin olive oil and Black Cumin Seed Oil (these also have palmitic acid in them). The only fat that I consume that is mostly saturated is Ghee, and I try to not consume more than a tablespoon a day.

But again, there’s scientific evidence and your own personal experiments. As always, listen to your own body and ignore all other evidence. If you feel better consuming copious amounts of coconut oil then do it and ignore this post.

Coconut oil can be very beneficial for some conditions like candida. I also think Caprylic acid and Capric acid are very healthy, both of which are found in coconut oil.

While reading this article, it may seem like I believe saturated fats are “bad.” I think the story is more complex than that. It all depends on what you replace it with, genetics, and other factors like a number of calories you consume. When you consume fewer calories than you need, saturated fats won’t cause much insulin resistance.

Also, if you’re overweight, your muscle insulin receptors are probably already insensitive, so eating saturated fat probably won’t make much of a difference and could maybe even transiently be beneficial if it curbs appetite and helps you lose weight.

I did notice on the diet that it curbed my appetite so I can see the appeal in that regard (a starch-based diet also curbs hunger and limits caloric intake).

Experiment for yourself and don’t listen to gurus. See what works for you.

I welcome dissenting opinions and studies that counter the points I make. Please post studies and not links to bloggers.

We have tried nearly every diet you can find and have discovered that the healthiest diet for people with food sensitivities is the lectin avoidance diet. Try our cookbook to get started! We promise the food is delicious!

Podcasts
4.9
4
Dr. William Walsh: Lab Tests For Mental Health Issues
Conditions
6
37 Ways That Inflammation Can Change Your Weight
Anti-aging
0
Looking To Your Genes For The Secret To A Long Life