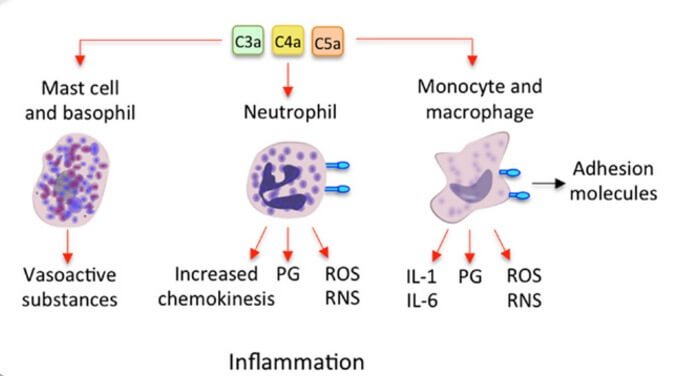 Information is sparse on C4A, but I’ve tried to gather what there is. C4A is often elevated in chronic inflammation.

C4A is part of a “complement” group. The term complement means it is able to kill bacteria and contributes to immune defenses. However, if there are too many compliments, it can cause tissue damage and trigger an allergic reaction.

C4A is an activation protein, which means it also activates the other complement proteins to increase in level [1].

They also mediate inflammation and the generation of free radicals [3].

You can request that your doctor test your C4A. Conventional doctors will look at high or low C4A levels and not mention anything. Sometimes, a lab result may be in the reference range, but not actually be in the optimal range. Reference ranges are not the same as optimal ranges. This is why C4A even in the ‘normal’ range can be unhealthy and indicate that certain processes in the body aren’t optimal.

There are three general pathways by which the body increases C4a: The Alternative Pathway, The Lectin Pathway, and The Classical Pathway.

These pathways are activated by infections, which include bacteria, fungi, viruses, and parasites.  Immunoglobulins (IgG, IgM) and CRP can also increase C4a (they can be high in infections). The body often detects infections by the toxins that they give off, so toxins may also increase C4a.

C4A appears to be an immune marker (has increased levels) in the following disorders:

It’s been observed that C4A levels can be increased in people with Lyme disease [5].

C4A levels may be decreased with mold avoidance (anecdotal) and antibiotic treatments [6].

Some researchers are looking at C3A and C4A levels to diagnose Lyme disease [6].

One must realize, however, that C3A and C4A and general markers, and will never be able to diagnose Lyme disease specifically (see images above).

One study found that C4a goes up after exercise in people with CFS [15].

A case study found that a CFS patient felt better after their C4a normalized [7].

Many people who believe they have histamine intolerance have high C4a because this activates mast cells.