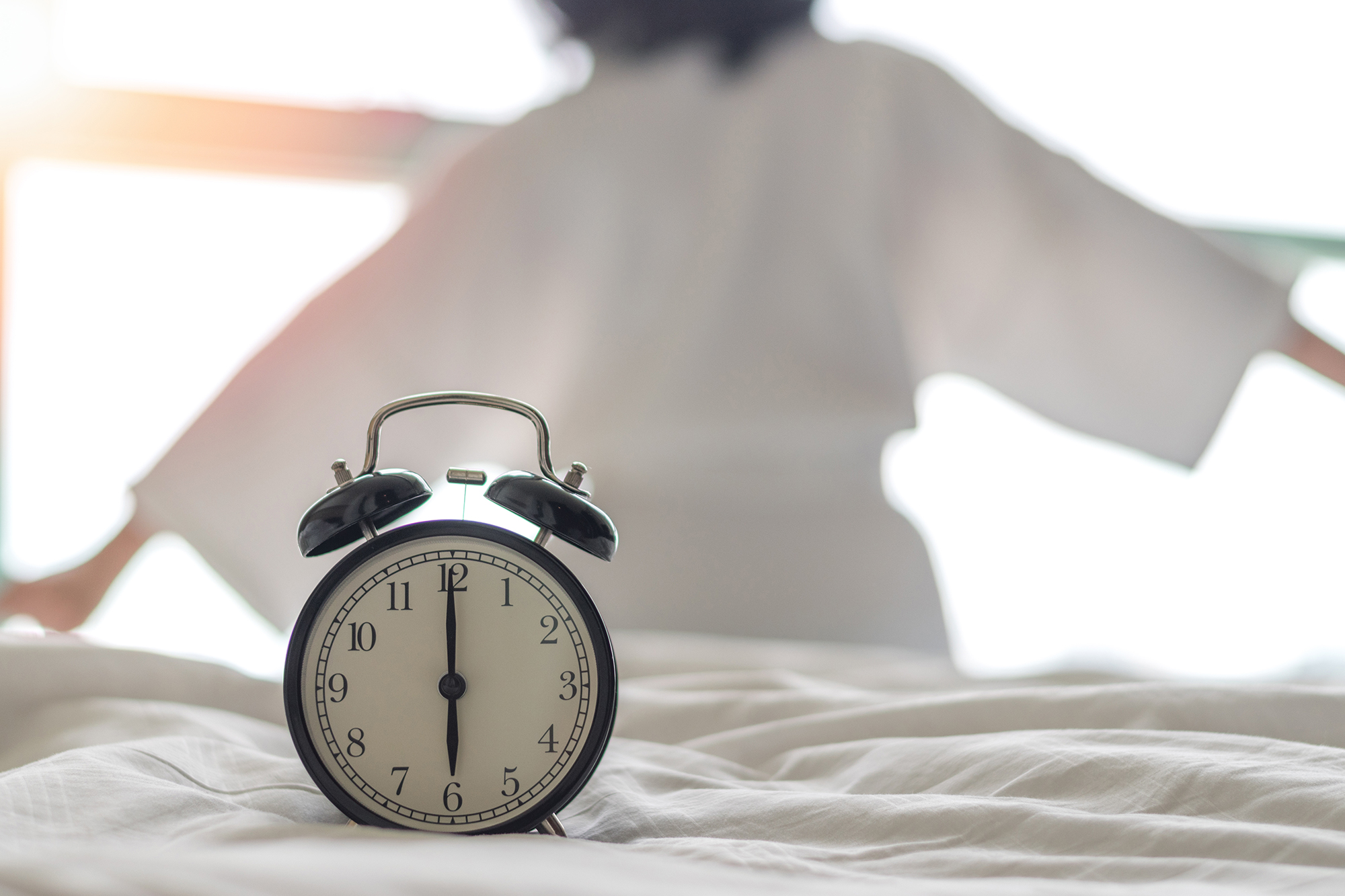 In the morning, light on the retinas signals the SCN to shut off melatonin [1].

Prolactin is secreted early after sleep onset and rises through the night [2].

GHRH spikes at about midnight while growth hormone gets released a bit later.

Metabolism is lowest at about 4 AM and this corresponds to our lowest body temperature.

Toward the end of the sleep phase, before early morning, the renin-angiotensin system kicks up. This increase causes aldosterone to also increase (before cortisol rises) [3].

Aldosterone and cortisol both cause a blood pressure spike.

In lean people, ghrelin rises rapidly at midnight and peaks about 2:30 AM, but not in obese people, where it stays flat [4].

Ghrelin continues to be high until the morning. Ghrelin stimulates NPY in the hypothalamus increasing our desire and ability to eat a lot more. Melatonin is known to acutely decrease ghrelin.

Light at night can disturb the ghrelin release [5].

Leptin rises as the day goes on and peaks at midnight and is at the lowest point between 9AM-12PM. The timing of your meals affects when you have a peak of leptin [6].

Leptin makes NPY decline normally, but if one is leptin resistant this does not occur and appetite is out of control at the brain level.

Testosterone secretion peaks at about 9 AM. This is preceded by FSH and LH secreted at about 6 AM.

At 6:30 PM we see our highest blood pressures due to changes in atrial natriuretic factor and antidiuretic hormone (ANF, ADH).

Some evidence suggests that heart attacks often occur in the morning. Epileptic seizures peak in the late afternoon. Asthma attacks get worse and more deadly between 11 PM and 3 AM [1].

In the morning, the immune system may be overactive, inflaming airways in asthma sufferers and swelling arthritic joints [1].

Blood pressure and heart rate start increasing in the morning due to cortisol [1].

Heart attacks and strokes peak at around 9 AM, partly because of the higher blood pressure [1].

GERD may be higher at night. Stomach acid production peaks between 10 PM and 2 AM [1].

In the late afternoon and on we see more antioxidant gene expression [7].

During daylight hours, we see increased Nrf2 gene expression, and at 6 PM, we see a peak in NRF2 protein [7], which some scientists call the body’s core antioxidant defense system.

Some researchers suggest that circadian disruption is tied to higher levels of oxidative stress [7].

PPAR alpha and gamma, proteins implicated in metabolism, are also active in the day and are controlled by CLOCK/BMAL1 [7].

Scientists posit that when the cellular clock is disrupted, it results in a deficiency of NAD+ because NAMPT, the enzyme that makes NAD, is controlled by clock proteins – BMAL1 is especially important for this [8]. Less NAD+ leads to a reduction of SIRT3, which is necessary for metabolism and mitochondrial function [9].

Some part of your immune system is elevated in the day and some at night. TNF, IL-1, IL-2, IL-6, and IFNy are elevated, in part because of melatonin [10].

TNF–α, IL-2, and IFN-γ likely work in part by inducing slow wave sleep, which makes us more resistant to infections [10].

T cell numbers and its reactivity were stable during the daytime, whereas a significant increase was observed in the late evening and early morning hours [10].

Scientists think this may be associated with why people with arthritis have “morning stiffness of joints,” because of these aspects of the immune system peak from midnight to early in the morning [10].

Cytokines, such as TNF, can change the circadian rhythm, so the effects are bidirectional [11].

Per2, which peaks toward the early evening, increases natural killer cell activity [12].

Mice who eat at the wrong time (when it’s dark for humans) gained more weight, despite the absence of any significant differences in calorie intake or activity over the course of the experiment. [13] Scientists suggest their metabolism shifted, but similar mechanisms have not been explored in humans.

Limited studies suggest that a disrupted circadian rhythm is why shift workers are at increased risk of obesity. Large-scale studies are needed [14].

Mice deficient in the core circadian CLOCK gene develop obesity. These mice have reduced levels and a flat rhythm of orexin, a neurotransmitter that increases energy metabolism [13].

Mice deficient in another circadian gene (Bmal1) had defects in insulin secretion, both at base levels and in response to glucose stimulation. These mice were highly susceptible to diabetes [13].

When mice were bred without BMAL1, they lost weight [16].

The effects of BMAL1 and BMAL1 deficiency on weight loss in humans are unknown.

Overall, a BMAL1 deficiency fits with the thin phenotype client who has sleep problems and can’t gain weight.

In mice, deficiency of BMAL1 leads to increased ROS levels in several tissues [17, 7], which is an issue my clients deal with.

Adequate BMAL1 is needed for the production of vasopressin [18], which is something low in my clients.

Having too little BMAL1 will ruin your sleep. Many of my clients have sleep problems.

Adequate BMAL1 is needed for the production of hypoxia-inducible factors [18], which is something that I’d guess would be low for my clients because they often have low EPO, which needs HIF [19].

A BMAL1 deficiency may also correlate with higher LDL cholesterol levels because BMAL1 (and CLOCK) may be needed to increase LDL receptor genes, which swallow up LDL [18].

Mice bred without BMAL1 are infertile, small in stature, age quickly, and have progressive pains in joints and are more sleepy and less active (less overall locomotor activity) than normal mice [18].

BMAL1 (and CLOCK) increases gene production of NAMPT [8], which is crucial in converting niacin (also called nicotinamide) to NAD [20], which is what puts the pedal to the metal of metabolism. So less BMAL1 may imply less NAD+, slower metabolism, and energy production [8].

Having less BMAL1 will result in less SIRT1 protein and activity [24].

Histaminergic neurons are silent during sleep, and start firing after waking. Histamine, made by the enzyme histidine decarboxylase (HDC), enhances wakefulness.

BMAL1 increases hair growth. Mice deficient in BMAL1 had a delay in hair regrowth after shaving [31].

BMAL1 increases the circadian genes Per1, Per2, Rev-erbα, and Dbp)

Star is the rate-limiting step for hormone production. It transports cholesterol to the inner mitochondrial membrane to be transformed into pregnenolone. Recently, it has been found to play a role in creating bile as well [35].

Hsd3b2 plays a crucial role in the synthesis of all classes of hormonal steroids. This gene is predominantly expressed in the adrenals, ovaries and the gonads [36]. The HSD3B2 gene provides instructions for making the 3β-HSD enzyme, which is necessary for the production of progesterone, testosterone and ultimately cortisol, aldosterone, and estrogens.

CYP19A1 is a gene that makes aromatase, the enzyme that transforms testosterone to estradiol.

In the male, the LHCGR has been identified on the Leydig cells that are critical for testosterone production and support sperm production. LHCGR is also important for female fertility as well [37].

BMAL1 (and CLOCK) is also important for GnRH receptors in the pituitary gland [38]. This receptor receives the signal from the hypothalamus (GnRH) to produce LH and FSH.

BMAL1 increases the nerve growth factor receptor which can bind to NGF, BDNF, NT-3, and NT-4. This can mediate neuron cell survival.

Miscellaneous
4.8
4
SelfDecode Review: Everything You Need to Know
Miscellaneous
19
Top 17 Alan Watts Videos (With Summaries)
Genetics
4.1
24
Cohen Modal Haplotype: Are you a Cohanim?