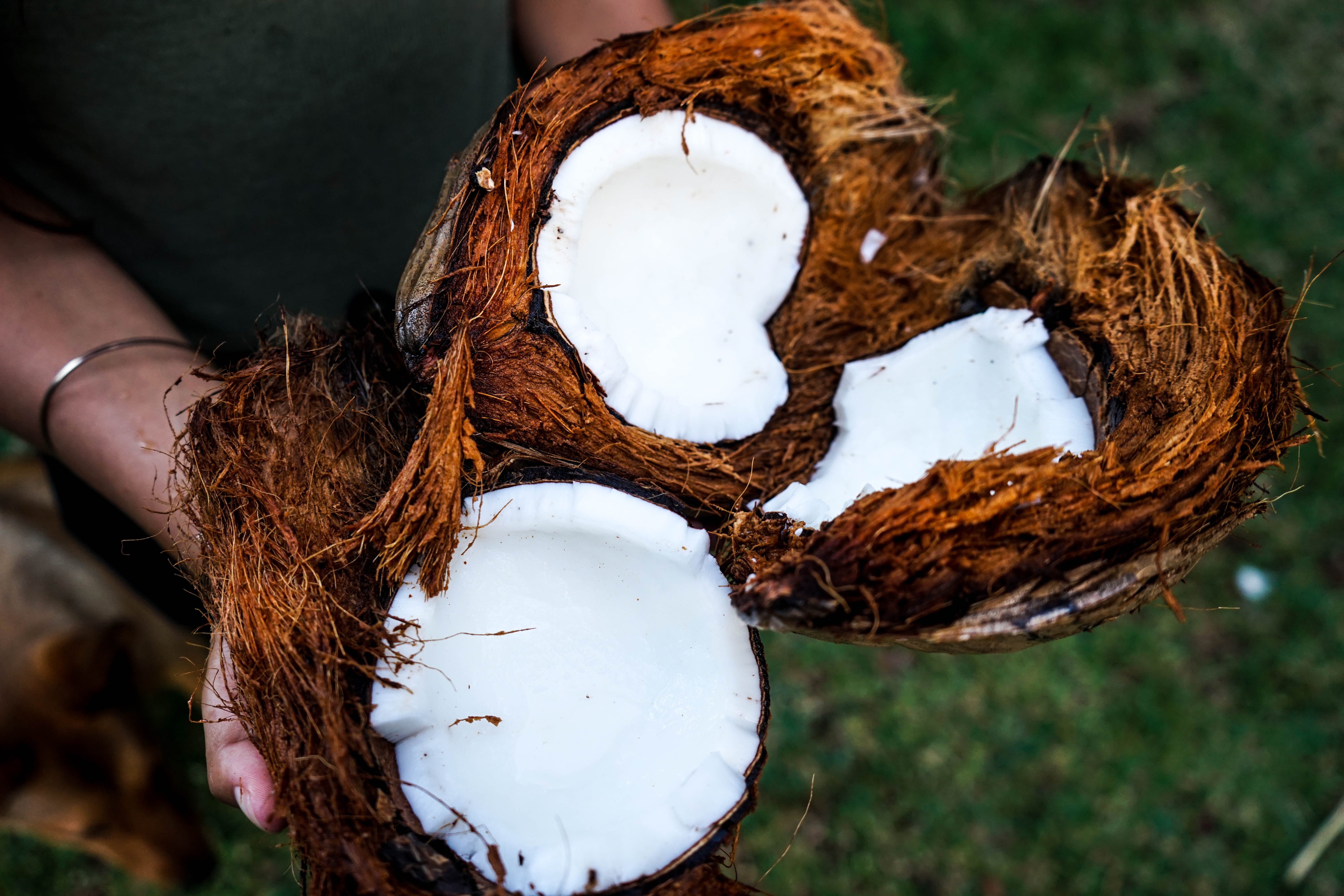 A recent study from Sweden shows that saturated fats (SFA) from palm oil, which is similar to coconut oil in saturated fat content, increases a person’s storage of fat in the liver, which markedly increases diabetes risk.

I’ve spoken about the harms of saturated fat before, but this study is a clinical trial that mimics the real world to a large degree. What we see is a translation of mostly animal studies to well-conducted human studies.

The subjects in the study were overeating and gained on average 1.6kg in both groups. Overeating PUFAs caused half of that weight to be stored as fat and the other half was turned into muscle. On the other hand, overeating saturated fat lead people to 80% of those calories to be converted to fat and 20% muscle.

What we see is overeating is never a great idea, but overeating is a fact for most of the west, so it would be wise to choose what you should overeat.

It’s important to also note that the subjects in the study were eating fructose. Fructose and saturated fat have an additive effect on increasing liver fat [1]. I’ve mentioned on the blog before that I noticed this combination didn’t go well for me and the research supports this. Realize that fructose is an almost necessary component of the modern lifestyle, though.

I would personally rather eat more fructose than saturated fat if I had to choose one. And this is what I do in practice. This is because I don’t feel weak from fructose and I never was able to overdo it, as long as I didn’t consume oils with a high saturated fat content.

The study mentions that PUFA may not only be not harmful, but also beneficial in reducing liver fat.

These results vindicate my own personal experimentation or feeling very weak from coconut oil and other saturated fat oils.

I would go further and say that this study was done in people who probably adapted to a higher fat diet over the millennia, whereas those from non-Nordic ancestry probably have it worse.

In a different study done in 2012, they randomly assigned 67 abdominally obese subjects to a 10-wk isocaloric diet high in omega-6 PUFAs or a diet mainly from butter, without altering the macronutrient intake. Liver fat was assessed by MRI and magnetic resonance proton (1H) spectroscopy (MRS).

The PUFA diet contained the same omega-6’s that drive the paleo world insane.

Most important the results were that a high omega-6 PUFA intake does not cause any signs of inflammation or oxidative stress, contradicting the paleo/low carb bloggers.

This study flies in the face of some “bulletproof” fellows and company who claim that omega-6 PUFA are deadly and we should pound butter instead.

Coconut Oil is a Relatively Recent Invention: It’s Not Even Paleo

We didn’t evolve to eat oils, especially coconut oil. Coconut oil is a recent invention, so it’s puzzling why paleo people support it.

My advice: stick to the whole foods like our ancestors did.

How Different is Palm Oil From Coconut Oil?

The first study cited above discusses palm oil, but a commenter pointed out that there can be more than one palm oil. There’s palm kernel oil and palm oil. Palm kernel oil is almost identical in its fatty acid profile to coconut oil, while palm oil has less saturated fat than coconut oil. Coconut oil is ~82% saturated vs palm oil which is ~51% saturated. However, palm oil has more palmitic acid (43% vs 8%), which may be a bit different than other saturated fats. However, there are much more similarities than differences.

So palm kernel oil has a higher level of saturated fat but a lower level of palmitic acid compared to palm oil. Palm oil contains oleic acid, which is a healthy MUFA. There’re good reasons to think that they could’ve used either one, but since the study mentions “palm oil” it probably means palm oil.

Let’s compare this to coconut oil. It contains a whopping 91% saturated fat, beating out palm and palm kernel oils.

Let’s also look at the fatty acids in coconut oil and see the research on each one.

All 3 fatty acids also raise LDL cholesterol, with lauric acid raising it the most, followed by myristic acid and palmitic acid.

In a case-controlled analysis, the risk of high-grade prostate cancer was increased by myristic acid intake [6].

Generally, the research is pretty clear that myristic acid and palmitic acid should be limited in the diet for optimal health, so I won’t speak more about this.

What about lauric acid? I already mentioned how it can cause insulin resistance and raise LDL. But wait, there’s more! A study done on mice testing Lauric acid showed that it caused broad inflammatory effects.

Technical: In the study, lauric acid increased costimulatory molecules (CD40, CD80, and CD86), MHC class II, and cytokines (IL-12p70 and IL-6) in bone marrow-derived DCs, via activating TLRs [7]. See a primer on the immune system to understand this.

However, a Malaysian study found no difference in inflammatory markers with lauric, myristic acid of palmitic acid [8]. Whenever I read studies that are contradictory I take closer looks- so I read the full study. I was mainly curious about the length of the study, the size and the level of saturated fat. It turns out that it was only 3 weeks, was small (15 subjects per group) and had only 30% of the diet from fat. The results then don’t surprise me, since this wasn’t a lot of fat in the diet. Most paleo supporters advocated for anywhere from 50-80% and mostly saturated fats. I think these people are crazy, absent a ketogenic diet.

Anyway, I emailed the author as to which he is referring to and am awaiting a reply.

Excess Fat Stored in the Liver Leads to Diabetes

The study deals with palm oil, so it might be a bit worse than coconut oil, but I think the outcome would be similar. The fatty acid profile isn’t too different between them and my bad experience was with coconut oil. Coconut oil may also have more/different phytochemicals than palm oil that counteract fatty liver, but the point is that we see a high level of saturated fat increases liver fat, which is the worst kind of fat in the body.

People on high-fat diets eat very little carbs, so the situation is better, but eating little carbs has its own drawbacks.

Keep in mind that if you are eating these oils but also restricting calories and exercising, these steps will counteract the effect to a very large degree and may not cause fatty liver. However, I felt very weak doing this and I don’t recommend this approach unless it’s a last resort to lose weight. Whenever I over-consume any saturated fat I feel weak. Others, however, report that they feel more energetic.

A commenter has pointed out that the people in the study were over-consuming calories. But like I said in the previous paragraph, that if you restrict calories the fatty acid profile becomes less or not relevant and this study doesn’t apply to you. However, in the real world, most people eat an excess of calories. And I’ve seen people get convinced that coconut oil is so healthy they should use it as a medicine, so they’d eat a meal and consume coconut oil after as a health food.

The point of this post is to show you that excess saturated fat even from coconut oil, a supposed superfood, can cause insulin resistance, fatty liver, and inflammation and you should consume it in moderation (if at all). As always, if your own experiments tell you otherwise, then do what works for you, no matter what any study says! You have to listen to your own body.

Who Do I Think Should Use Coconut Oil?

I’m not dogmatic and I won’t say coconut oil is bad for everyone all of the time. There are some cases where coconut oil is extremely useful. The following are three scenarios which can come in handy.

1) Candida. For one, it’s great if you have candida. This is because it has antimicrobials that fight against candida [9, 10]. In addition, it has Capric acid, Saturated Fat, Lauric acid, and MCT, all of which inhibit candida [9]. This makes it a powerful candida tool.

2) Lectin sensitivity. I also noticed that the consumption of coconut oil decreased lectin sensitivity, even though it gave me other kinds of systemic inflammation that didn’t come from food.

I found a study that showed sialic acid content increased in the gut (specifically the brush border membranes) in response to coconut oil feeding [11]. This possibly decreases lectin sensitivity by providing a medium for which lectins can bind. See the symptoms of lectin sensitivity.

It’s also possible that saturated fats like palmitic acid and stearic acid cause macrophage death and therefore decrease some aspect of the immune system.

3) Weight loss, as a last resort. Coconut oil decreases my appetite and therefore consumption of calories, so if you are overweight you can try it out, though be careful. A recent study has demonstrated that low-carb diets are more effective for weight loss than low-fat diets – however, the fat was likely not mostly saturated [12]. However, these people ate on average 127g of carbs instead of the recommended 40g and they ate mostly unsaturated fat [13].

I would recommend trying a lectin avoidance diet if sensitive to lectins or a resistant starch diet if not before you try to lose weight with coconut oil. I suspect this is particularly true with lectin sensitive individuals. But use it in conjunction with limiting calories. Don’t view it like vegetables, where you consume as much of it as you want. It should be used to replace meals. Pay attention to your body.

Study From Sweden With Bolded Sections

The WHO and IOM Recommendations

I listen carefully to anything the World Health Organization or the Institute of Medicine say. These organizations aren’t biased and have great scientists working for them. An individual is limited in how many studies they can read thoroughly and I feel getting the opinions of smart people who pore over this stuff for a living isn’t a bad idea. Of course, we should always be skeptical, but I’d rather hear their opinions than bloggers who love to make money by debunking conventional wisdom and who usually don’t have training in analyzing scientific studies. Just by looking at the language they use, you can see they are much balanced than health bloggers.

These organizations recommend no more than 10% of the diet be saturated fat. 1.5 tablespoons of coconut oil provide this for a 2,000 calorie diet. Since animal products, nuts and seeds also contain saturated fats, practically following this advice would mean to cut out butter and coconut oil, but still be able to eat fats from whole foods in the form of avocados, chicken, etc. [15].

The Institute of Medicine’s recommendations: