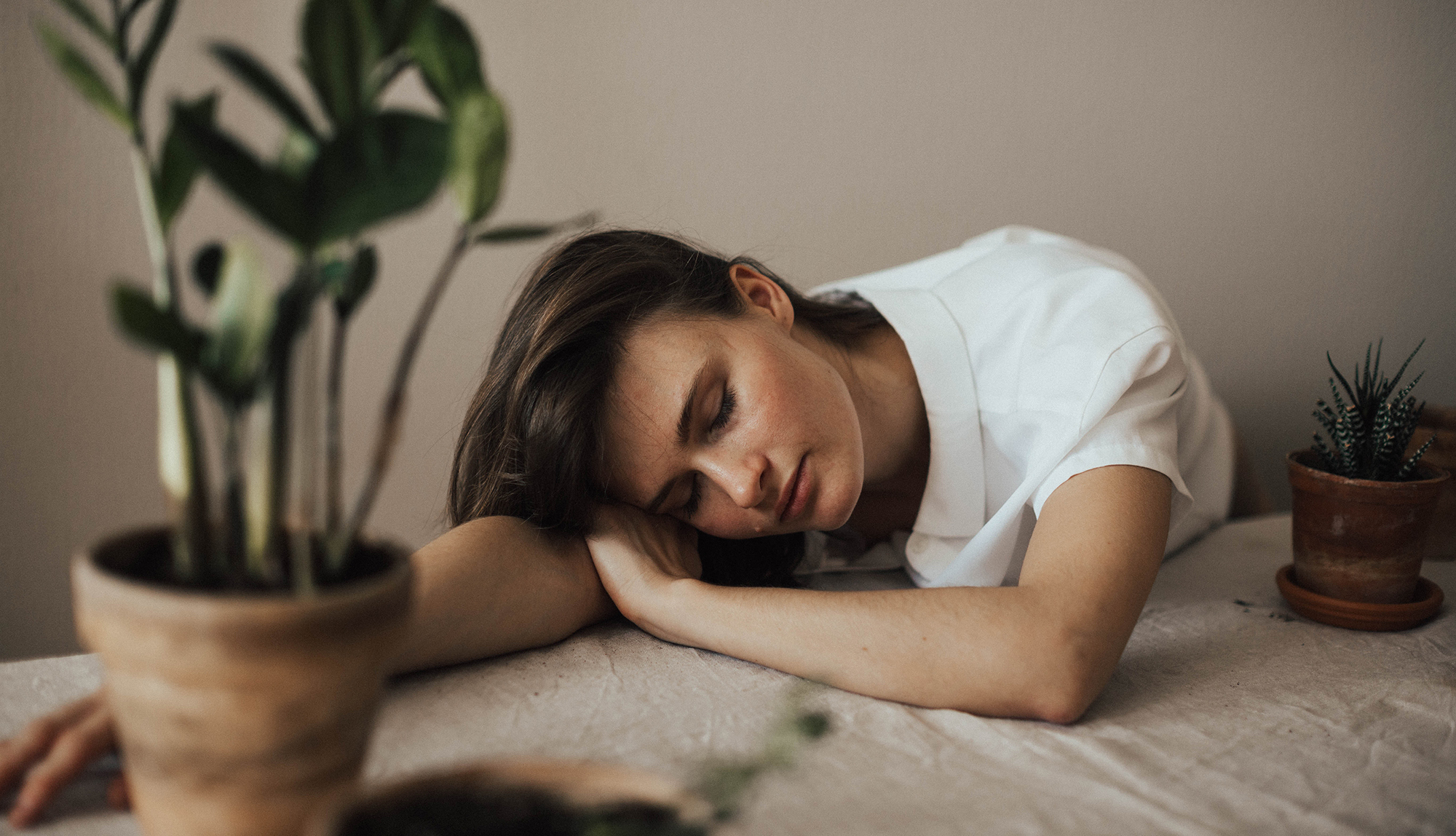 The hypothalamus is what controls wakefulness in the body.

Specifically, the hypothalamus contains neurons that release neurotransmitters called orexin/hypocretin and histamine, which play a central role in promoting wakefulness [1, 2].

Orexin is also responsible for hunger and even happiness and anger [3].

Orexin is thought to be a central cause of narcolepsy. Regarding histamine, think about how antihistamines make people tired.

This post will focus on orexin because while histamine also contributes to wakefulness, controlling orexin is much more significant for common fatigue that people experience and involves less risk tweaking it.

Fatigue can obviously result from a lack of sleep, but I will explore the reasons why people get tired despite having enough sleep. And even if you are lacking sleep, these methods will still fight your fatigue.

Glucose and Fatigue: Why You Get Tired After Eating Carbs

The first reason for fatigue is because of excess glucose [4].

This is why even people who are completely healthy say they get fatigued if they have too big of a meal. This is because carbs break down into glucose and suppress orexin neurons, especially if it is too much.

People who are insulin resistant and aren’t good at getting glucose into their cells will have more glucose in their bloodstream, which will contribute to fatigue.

Insulin resistance has many causes, which I’ve enumerated in a different post.

Inflammation and Fatigue: Why You Feel Tired After Eating Food

The second reason people get fatigued is because of inflammation [5].

The term inflammation is bandied around, even though it’s quite complex – so I’m going to be a bit more specific -and technical.

In this case, the theory is that inflammation-sensitive neurons of the lateral hypothalamus activate as a result of cytokines like IL-1b and other inflammatory signals, which in turn suppresses orexin neurons.

I’ve noticed that when I had inflammation I was much more sensitive to fatigue from glucose.

If I stray from my diet and don’t take supplements to make up for it, I’ll get inflammation and be more sensitive to glucose-induced fatigue – as in, a lower dose of glucose will cause fatigue (I experiment with dextrose, which is pure glucose).

So not only is inflammation an independent cause of fatigue, but I think there’s a negative synergism going on, where inflammation and glucose conspire to make you more tired than the addition of each of them.

Glucose and inflammation are the two main reasons why orexin neurons are inhibited, which in turn results in fatigue.

Even if I didn’t come across the above study about how inflammation suppresses orexin neurons [5], there were other clues that allowed me to realize inflammation is critical in fatigue.

Some clues for me were:

Tiredness From Glucose Was a Survival Advantage

The theory is as follows: when we experience hunger or when we’re in caloric deficit orexin neurons activate so that we can be alert and hunt or forage for food.

When we find that food, it makes sense for us to relax, rest and let our body focus on digesting that food and replenishing our energy levels, so that our brain will have energy later on to find more food.

However, if we eat and the brain senses we have enough energy, there’d be less of a reason to get fatigued. And this seems to be true.

This is why certain substances in the brain like lactate can prevent orexin from being activated and thereby prevent fatigue. (Lactate can also make you more awake by increasing norepinephrine levels).

In today’s day and age, food is abundant – so there’s no real need to be fatigued after meals. That’s why I think -to a degree – this evolutionary response is a bit outdated and we should try to use hacks to prevent it.

It’s interesting that if I fast or skip meals and then consume a high carbohydrate meal (carbohydrates break down into glucose), fatigue is more pronounced than if I ate the same size meal without fasting.

This would support the theoretical framework described above. It’s as if I’m telling my body there’s a shortage of food and now that I found some food I should relax to get ready to forage/hunt later on.

“Overall, we speculate that orexin activity, which is net-negative in terms of whole-body energy balance (Hara et al. 2001), is not always inhibited by glucose, but is instead flexibly tuned in a way that is optimal for survival. For example, under low-energy conditions such as starvation or anorexia, it could be advantageous for ingested glucose to suppress the orexin-driven net energy expenditure, thereby ensuring that more fundamental processes (such as keeping the brain alive) receive enough glucose. Conversely, when the brain has plenty of fuel (perhaps signalled by high levels of pyruvate and/or lactate), there may be little advantage in coupling glucose fluctuations to orexin activity, since under these conditions, acute changes in glucose levels would be compensated by other energy substrates.”

Tiredness From Inflammation Was a Survival Advantage

When you get inflammation, the body thinks you’re sick.

We evolved so that when we’re sick, the body will devote all of its resources to fighting that illness.

To conserve resources, the body limits our desire to eat, exercise, have sex or move around and get things done (motivation).

Additionally, our emotions, in general, get more dulled and our cognition dips.

These are highly adaptive responses to infection; we limit all the functions that aren’t crucial so that the body can focus on fighting the supposed infection.

When we ingest foods or other substances or just suffer from any kind of autoimmune or inflammatory condition, the body is tricked into thinking we need to conserve energy to fight (or fix) whatever is going on.

Here’s science speak for what I said above:

So we see that inflammation influences many bodily functions and, perhaps most importantly, it influences the circadian rhythm.

But there’s more to the story. The circadian clock and inflammation are deeply connected with each other. When people experience chronic inflammation, this may also cause their circadian rhythm to get out of whack. This brings to mind a number of clients who complained of chronic fatigue in the day and feeling more awake at night.

This disruption/dysregulation can lead to even more inflammation, and therefore a vicious cycle [6].

From the linked article above:

“When we disrupted the normal day-night light cycles of mice, essentially giving them jet lag, we found that too many TH17 cells developed and accumulated in the intestines. As a result, these mice were more prone to develop an IBD-like disease, due to friendly fire from the overabundance of those inflammatory TH17 cells”

I’ve noticed that when I get inflammation from food antigens, my circadian rhythm gets disrupted (I’m prone to a Th1 and Th17 response from food sensitivities) and I’d be more fatigued during the day and then be more awake at night.

For example, when I experimented with unmodified potato starch, I experienced inflammation and became fatigued.

Another illustration of the connection between inflammation and the circadian rhythm that comes to mind is bipolar disorder.

A significant cause of bipolar disorder is inflammation. The circadian rhythm is also disrupted in this disorder and drugs that help this (lithium and GSK inhibitors) benefit this condition significantly.

My guess is that lithium‘s main mechanism of action is that it lowers inflammation, which may be why it can take months for there to be a clinical benefit [7]. (See the benefits of lithium orotate).

I’d like to mention that being overweight is a significant cause of inflammation, which is probably a significant reason why people feel more vital when they shed a lot of weight.

Leptin, which inhibits the desire for food but is high in overweight people because of leptin resistance and larger fat cells, activates GABAergic neurotransmitters in neurons in the hypothalamus, which then inhibit orexin neuron activity [5].

So, in short, if you’re overweight you’ll more likely get tired in the day and have less energy.