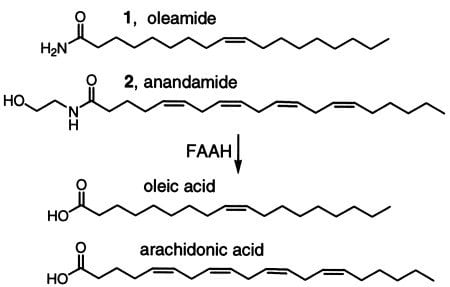 Anandamide will activate the cannabinoid/CB1 receptor and interact with CB1 receptor SNPs.

The endocannabinoid system got its name from cannabis since THC is closely related to the brain’s own anandamide.

Anandamide is taken from the Sanskrit word ananda, meaning bliss – because when it binds to the cannabinoid receptor, it has a calming effect.

Genetic deletion of FAAH in animal studies produces antidepressant-like effects, and this is thought to be mediated by increased serotonin and noradrenaline transmission [1].

We will generally want more anandamide and less arachidonic acid. Therefore, having lower FAAH enzyme activity can have some good effects.

Anandamide enhances levels of adenosine outside of cells and induces sleep [3].

FAAH is found in the brain, small intestine, pancreas and muscle [4].

C is the more common allele. Only 26% of the alleles in the global population are “A”.

The change displays normal enzyme properties but an enhanced sensitivity to degradation [5].

Functional in-vitro studies further revealed that the A allele decreased the production and activity of FAAH in humans [6].

People with the A allele are less anxious and are thus less inclined to like marijuana.

They actually experience a decrease in happiness when smoking marijuana, compared with those with the normal FAAH gene, who find it pleasurable. If you naturally have more of the real thing you understandably have little use for marijuana [8].

Studies show that those with CC suffer more severe withdrawal when they stop using cannabis [8].

For example, one community-based study of almost 2,100 healthy volunteers found that people with AA had roughly half the rate (11 percent) of cannabis dependence than those one or more C’s (26 percent) [8].

Both mice and humans with the A allele showed enhanced fear extinction (they learned more efficiently how to be unafraid) [8].

A has decreased threat-related amygdala reactivity and increased reward-related reactivity in the ventral striatum indicating its role in stress adaptation [9].

When mice were genetically engineered to have the AA version of the gene, they were less anxious. The mice showed similar changes in the neural circuits involved in people with lower anxiety and fear (greater connectivity between the prefrontal cortex and the amygdala).

A is less likely to develop cannabis dependence.

In some studies (but not all), A is associated with obesity [6].

AA is at higher risk for substance abuse. AC is the normal risk [5]. A has a synergistic effect on these conditions with the CB1 receptor gene [10].

One study found the exact opposite effect if some studies above and showed increased startle reaction in A carriers to unpleasant images [1].

Similarly, genetically reduced FAAH activity may be a risk for the development of anxiety and depression in persons with repetitive childhood trauma. Specifically, the A allele is a risk factor for these conditions when exposed to childhood trauma [13].

The A allele was associated with lower HDL levels [4]:

Each 1 mg/dl reduction in circulating HDL level is known to be associated with a 6% increase in the risk for cardiovascular disease [4].

After weight loss, CC had an improvement on insulin and insulin resistance scores with an enriched monounsaturated fat hypocaloric diet [15].

A psychoactive ingredient in cannabis helped people with IBS-C more when they had CC [16].

The A allele is associated with antipsychotic-induced weight gain [17].

G is the more common allele. 35% of the alleles in the global population are “A”.

Associations With The G Allele

The presence of the G allele was linked with an increase of recollections of the traumatic event [18].

In one study, rs2295633 was the only FAAH SNP to reveal a significant difference in PTSD prevalence. G compared with AA subjects, presented with a higher PTSD diagnosis prevalence (P=0.001) [18].

Negative early experiences increased PTSD risk only in those subjects presenting at least one G [18].

The G allele could serve as a possible marker for increased PTSD risk in subjects exposed to brain injury and combat experiences [18].

How to Increase Cannabinoids

In fact, a recent study suggests that CB1 receptor deficiency may mimic the effects of chronic stress on emotional behavior [9].

Anandamide, 2-AG, 2-AGE, and other endogenous cannabinoids are derived from arachidonic acid [19].

Exercise increases anandamide, which is our natural CB1 activator [22].

Activation of nicotinic receptors leads to increased cellular levels of calcium (Dani et al., 2001), which is known to stimulate release of endogenous cannabinoids such as anandamide (Piomelli, 2003) [24].

Tea/EGCG (Full agonist, Ki 33.6 μM) [30, 31] – according to another group, flavonoid-type compounds (catechins, anthocyanidins, flavones) lead to negligible or very high Ki values, which likely reflect a nonspecific molecular denaturation of the protein surface rather than a functional binding interaction [32]

Echinacea binds to the CB2 receptor [39]

Caffeine can help with a stress-induced decrease in the CB1 receptor [41].