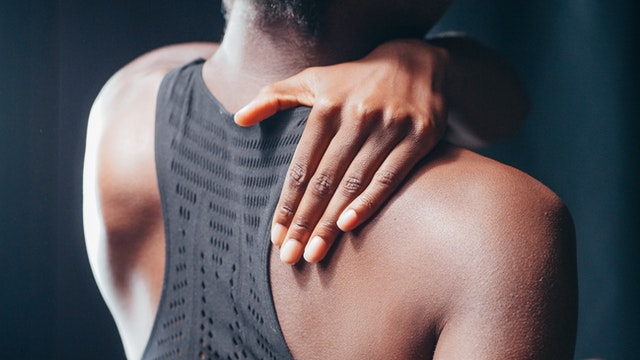 People often tell you “pain is normal as you get older,” but why should we accept that as fact?

Why can’t feeling healthy, energetic, and pain-free be normal (even as you get older)? Why do Icy Hot patches have to be a common household item?

It’s crazy to think that 20% of Americans suffer from long term pain, and they just accept it as part of their daily lives. Not anymore.

Pain is heavily influenced by our genetics. By understanding the genetic variants causing us pain, we can easily stop the problem right at its source.

A lot of chronic pain actually stems from your brain chemistry, and the DRD2 gene can especially play a role.

The DRD2 gene encodes a dopamine receptor that affects how and whether we feel pain. For people who carry a certain DRD2 variant, magnesium has been shown to increase dopamine activity in the brain, counteracting this gene’s negative effects.

GET THE CHRONIC PAIN REPORT

Poor posture which leads to shoulder & neck discomfort is increasingly common. After all, your neck and shoulders are carrying around the equivalent of about 40 bananas in the form of your head all day.

What most people don’t know is that poor posture is only one factor in this kind of pain. Up to 68% of people’s differences in having shoulder and neck pain may be attributed to genetics.

One NOS3 gene variant can play a role by impairing blood flow through the neck. Studies have shown that certain lifestyle changes may help people with this gene.

GET THE SHOULDER & NECK PAIN REPORT

Kidney pain is felt in the sides or back, and people often mistake it for back pain. The CDC estimates 15% of Americans have chronic kidney disease, and most don’t know anything is even wrong.

The SCNN1A gene controls how much salt is absorbed in the kidney. In some SCNN1A gene variants, increased salt intake is linked to increased blood pressure which can damage the kidneys. That’s why if you have this genetic variant, it’s best to limit salt intake.

GET THE KIDNEY HEALTH REPORT

The sudden gnawing pain caused by gallstones is something that you should never have to experience. Most people who end up with them have somewhere between 2 – 20 stones, but according to Guinness World Records, one person back in 1987 had 23,530 gallstones!

I wouldn’t be surprised if that guy had a certain variant of the CYP17A1 gene that can put you at an increased risk of developing gallstones, particularly if you are overweight. Fiber supplementation can be super important if you have this genetic variant.

GET THE GALLSTONE REPORT

If pain isn’t an issue for you, we have 18 reports (anxiety, mood, and stress to name a few)…

GET ACCESS TO EVERY DNA WELLNESS REPORT
Why live with pain?

We don’t think you should.

Your genes can influence how sensitive you are to pain, your likelihood to develop long-term pain, and how your body responds to pain treatments.

Get personalized recommendations on how to counteract your genetic weaknesses and reduce pain with SelfDecode’s Chronic Pain DNA Report!